Been awhile since our last post and I've had this one in mind for awhile, just been a matter of clearing up time for myself to do it. Here in Hudson I've seen plenty of technique and "exercises" that make me cringe and my joints and muscles ache just watching them. About a month ago something that had pretty much nothing to do with those gave me one of my biggest shut the front door moments. Like I said still havin a hard time finding time for everything, getting better though.

One of the tools myself and a few others here use for assessments is an overhead squat. Shoes are off, hands overhead, feet about hip width to shoulder width apart, sit back and squat down and I'll look for what needs to be fixed. Well I did one of these on a client of ours named Evan. The second Evan took his shoes off and I saw what looked something like the picture here I knew almost immediately what was going to happen, toes turned out knees went knock. 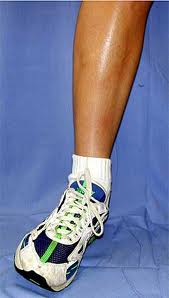 Evan is in fact an athlete of sorts, and I bet the first guess most of you have is that he is a basketball player that has just rolled his ankle a kajillion times (yeah don't care it's not a word I used it) sorry nice guess, but wrong. Evan is a member of a crew rowing team. After doing a quick look up on exactly what the technique for this is I came to a conclusion that this explained it all. In crew you are tucked into a tiny seat, while in this tiny seat you are pushing with your legs with all your might to pull an oar, along with using your shoulders of course. The reason I mentioned the tiny seat is because Evan is almost forced to keep his knees together when he pushes with his legs as he row, because he is a fairly big kid squeezed into this child's sized seat. 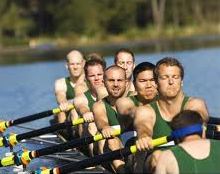 Between keeping his knees together and pushing through the inside of his foot, I'd say that would pretty much sum up why the medial part of his ankle is nearly on the floor when he walks and looked like he belonged in Happy Feet, which seems like kind of an ironic title here. We loosened the lateral part of his calf along with his adductors with some SMR (aka Foam Rolling, I know a term not everyone understands, amazing!) and stretching, and reactivated his medial calf and abductors with some corrective exercises. About a month later his ankle looks so much better, it's almost normal and I don't cringe and feel like my ankle wants to buckle when I look at it for longer than 2 seconds. Now a thing to remember here is because Evan was so grooved into his unusual functional pattern that his ankles and feet may never look completely normal, but that's no reason to leave it as is, he's under the age of 22 so he may yet be able to be completely repaired. That's all I got for today kiddos, until next time, ta ta for now.