Injury Update and Round Backs Are Not Your Friend

Hey it's June, never thought we'd make it here after Nemo but we did it guys! Hockey is getting down to the nitty gritty, although I'll say from just a hockey fan in general's perspective, it's been a pretty disappointing pair of series, both are one sided to this point and none of the games were that competitive. LA showed some fight last night, so there is hope yet. The good news is that whoever happens to come out of these Conference Finals I think the Final for Lord Stanley's Holy Grail will be a good one.

Real quick, and I mean real quick because I know everyone here is just so concerned with how my face is doing after my post from a few months ago. The eye is heeling fine, I will probably have a new scar to go with the one that was there from when I was just a little guy (me little?? I know not possible). I made it through the season without reopening it thanks to my scrum cap and some vaseline...keep your mind here guys come on. I'm not any prettier but I'll be fine, still going to be healing for up to another year or so. 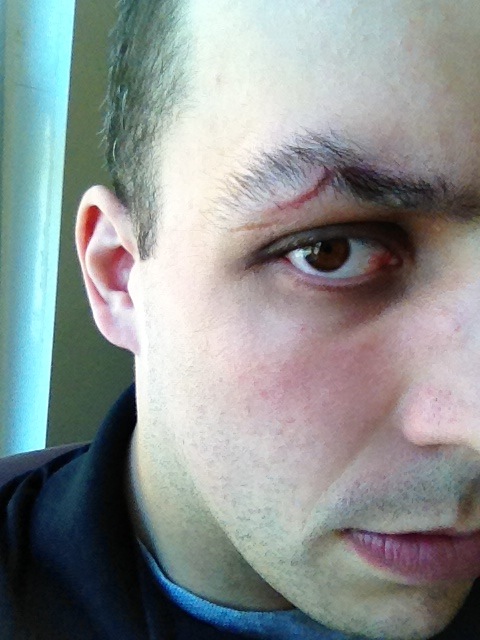 Now that everyone can relax knowing that my health is in good shape I'm going to get into one of those posts about something really dumb I've seen a number of people do here while working out. Not so much of a rant, call it more charity, free advice on how to not have your spine turn into dust while doing a deadlift, and if you haven't guessed it from the title,we are talking about rounded backs.

The last few days while either I was working out or while training clients I've noticed a good number knuckleheads doing a variation of the deadlift (one was trying to turn it into a power clean and yeah I'm not getting into that because it will get me way too fired up and it's too early for that). Back to the point, most of these lifts were just asking to be put on the operating table for a back issue. Flat back is a safe back guys and none of these people had one, even on their warm-up sets, oh boy!

I know there will be someone reading this that's going to want to jump all over me like a fat kid on fried twinkie "Pavel deadlifts with a rounded back" or the like. News flash champ Pavel has been at this for way longer than most of us, including some of the better known pro's out there like Eric Cressy, Dan John and Dean Somerset (note that none of these guys are into the hump back thing either). He also freaking deadlifts 900+ pounds. Pretty sure no one can keep a completely rigid back on that one and if you can sorry I don't have a trophy for you. Not everyone gets a trophy!

Let's just try this, unless you are doing deadlifts for record numbers and have been doing so for decades, keep a flat back, brace your core and lower back, and use your hips. No more using your lower back and no more turning it into a dead-squats, makes me wanna shove a hot iron in my ear when I see it. Mobility is restricting you from deadlift correctly? Do some mobility drills and elevate the deadlift for a spell, sounds good yes? OK so no more asking to get on the operating table by deadlifting with a rounded back.

Have a good one kids, go out there and get after it, the weather is beautiful, no reason not to!
Posted by Unknown at 10:42 AM