I'll try to make this a fairly quick but hopefully useful and to the point post today. I moved all my crap out of my apartment this past weekend, not exactly a great weekend. Honestly unless you are bat shit crazy then you probably aren't a huge fan of moving either. With Catherine's help we got it done in about 8 hours. We did as much as possible until about 10 PM Saturday night (5 hours), got up Sunday morning and finished the job (3-4 hours). 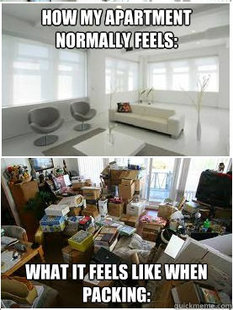 How this relates to strength training is pretty easy. Say I'm picking up a bureau that weighs 300 lbs+, split that between 2 people and it's 150, depending on which end you get stuck going down the stairs with. Doesn't sound like much, but you'd be surprised how many people have a hard time getting that much weight up off the ground in any fashion. To the point, if you don't do any sort of strength training then everything is going to feel like an anchor off of the Titanic.

Catherine and I both strength train for our various reasons and I can guarantee you, with the way we had to do some pretty odd maneuvers with some of this furniture because of the odd corners, a lesser pair would've had an issue trying to finish the job. The different angles we had to work with incorporated pretty much all of the main exercises that should be included in a solid strength program, presses, pulls, squats, deadlifts (grip strength much???) and the like. Throw in some core for stability and you've pretty much hit it all.

We were both pretty gassed either way you slice it but since we've both been in the strength game for a bit we didn't have too much soreness, or tightness to speak of. Again the average joe and jane would have not wanted to move for 5 days. Moral of this story is, yes it is better to be strong for several reasons, and because those of us that do this shit day in and day out we are going to suck less at life than the ones that don't.

An early Happy Independence day to all and go out there and get after it so moving sucks just a little less!
Posted by Unknown at 2:56 PM