My Evolution of Boot Camp to Strength Camp

It's a class most people are attracted to because it's usually intense and tough and it leaves you sweaty and beat. This makes those that aren't in the know think that it's THE best class out there for them. My thought is, and I know I'm not alone, that just because something makes you tired and sweaty doesn't mean it's going to be the best thing for you. The class is usually called Boot Camp, there's also been many other names you've probably seen, Muscle Blast, Muscle Shred, High Intensity Eliminator, Juiced Up Roid Rage Muscle Building and so on.

I currently teach a class at the facility on Friday at 6 AM for an hour that was named as a Boot Camp, and I love teaching it, but it has underwent a ton of changes since I got my hands on it and here is what it was and what it has turned into.

I inherited this particular class from a friend and colleague when she left here to pursue her next adventure. My first time with this class was a bit of an adventure, I made the mistake of not really putting together any sort of schedule or list of exercises I wanted to do that day, BIG mistake, not my last either. My first couple months working with this class mainly consisted of a dynamic warm-up, then varying amounts of stations that I would do for varying times, really turned into a more cardio based thing than anything. None of this is so bad because at the very least I wasn't hurting anyone, but I also wasn't give the attendees really anything that was worth them getting up for 6 AM. I thought to myself, I hate this circuit high intensity crap, why am I making anyone else do it for almost 60 minutes? I knew I was way smarter than this and I was really good at getting people strong. There had to be a better format. 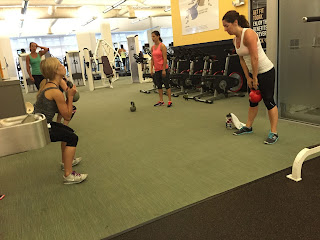 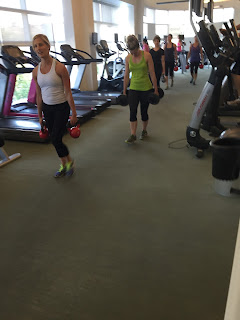 I began to take notice that the free weight area of the gym was fairly empty at 6 AM on Friday's (shocking right?), so I started to figure out some better things to do with the workout, and I also started a crawl series once I learned the value of them (tired and sweaty anyone?). I would bring the class over to the free weight area and show them 3 exercises to go through and then let them go and coach them. We'd do a 2nd set of 3 exercises and if we had time do some cardio/conditioning at the end. I soon discovered the next set of problems. I found people couldn't remember the exercises I gave them verbally, I didn't feel like the grouping of the exercise was well balanced and the end of the workout was pretty much the same thing all the time, some variation of sled work.

Finally in the last 6 months to a year I feel like I've reached the point where it's balanced, effective, fun and I feel like those that show up get everything they deserve for getting their butts here for 6 AM, especially when it is the dead of winter (I know sorry for the painful reminder). I've invested in a pack of dry erase markers to write on the mirrors so no one is asking what the exercise is, assuming they don't need me to coach them on it, which I'm glad to do when the opportunity rises. I bought myself a notebook so I can plan out in advance at least 3-4 weeks of the class so I can make sure I'm not training the same movement more than needs to be.

Interested in what the class format looks like? Well I'm glad you've stuck around this long because I'd rather share and hope it helps someone not make the same mistakes I did. 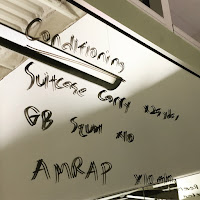 Part 5 (Finisher)
All in all I'd say the class has been effective, the cherry on the icing is that we changed the name last year to, you guessed it, Strength Camp. Seriously now, who wouldn't want to get their butt up before 6 AM to come hang out with this guy at a Strength Camp? Seriously it's a great class so if you're in the area shoot me a message and I'll arrange it so you can come in and give it a shot, provided you're game for a 6 AM gym session.

That's it for today everyone, until next time, go out there and get after it!
Posted by Unknown at 10:51 AM