Been a busy week here yet somehow I've managed more than one post in a week, mostly just motivation and partially because I feel a little bad leaving everyone hanging for the time that I missed. Either way I hope everyone enjoys this. I've had this whole idea for this post in my head to just take a shot at this subject and decided now is a pretty good time just because. My little idea machine also poked and prodded me to explain my reasoning for this simply to too many people. So in an effort to be efficient and not get so winded that my face turns reder than a hot dog from Maine. That's right motherland reference. 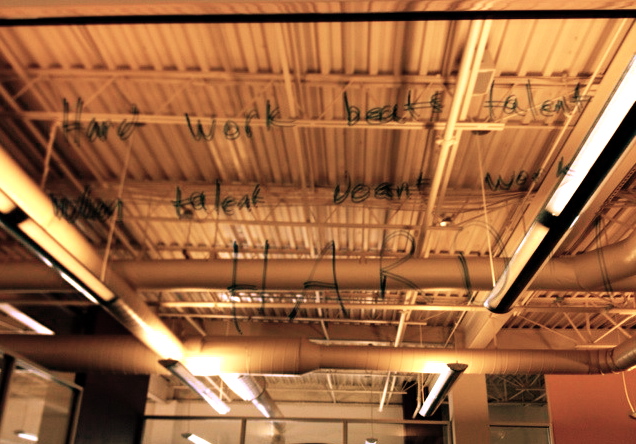 The above picture has a saying that was written on our mirror in the training room for the last 3 weeks or so, I tried to edit it so it's a bit more readable, for those that still can't read it "Hard work beats talent when talent won't work hard!" is the quote on there. Since it's been written I've really been thinking about it. I've know this to be the truth for a long time, but I never really took the time to think of all the examples there are in this world especially in sports. Following here will be the best examples I can think of in sports, no particular order, you can form your own opinion. Before you get too judgmental, live in the sports and fitness world for a day and you may have different thoughts.

Just so Pats fans can get their sports stiffy out of the way, Tom Brady. Picked 199 in his draft class, and it is well documented that he has dominated another very good quarterback for the better part of his career. For those that are really having a hard time with this one, either you don't watch the NFL or don't live in New England, the other I am referring to be would be Peyton Manning, 2 years before Brady he was picked number one overall. Now of course they both have talent, but Peyton probably had more and is more talented than Brady. Brady has done one thing to be better than him and win more Super Bowls than him, work his ass off. Being a Michigan fan I know how well documented it was that Brady was a freak for studying game film on his opponents and himself. Again not saying that Manning doesn't work hard, I'm pretty sure every NFL player works their tail off or they're cut in a blink, but Brady went the extra mile first, and in the earlier years I'd say Manning had the better supporting cast (Faulk, Harrison, Clark, you get the picture). 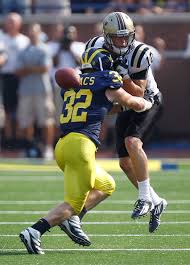 How about any walk-on that goes to any major university and plays a major sport (Football, Basketball and so on). Most prime example I can think of at the moment is the Swatt Man. JJ Watt started out playing TE at a smaller school and had a scholarship there, but he really wanted to go to his favorite school in Madison Wisconsin so he walked-on for the Badgers, watched more film than a movie critic and thanks to the big media frenzy over him lately, I'm sure you know the rest. Just to give another example, as I said I am a Michigan fan, their current strong safety Jordan Kovacs is a captain and has been a starter for longer than most would have gambled on. Jordan walked-on as well and has been in the top 2 in tackles since his sophomore year. He may not get drafted high, but I bet he will be drafted because these teams know it takes that type of work ethic. 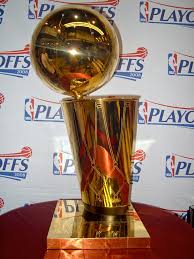 That horse is beaten, next example would be the NBA Champions from 2004, Detroit Pistons. Beating the LA Lakers quite handily 4-1. Those that are sitting there and saying that Detroit was more talented than the squad that LA (Kobe, Shaq, Payton and the like) put together, I'm sorry but you are way too much of a Pistons fan and need to get an outside opinion, so here's mine. NOT ON YOUR LIFE. The Lakers probably shouldn't have lost that final, let alone at 4 games to 1. Moving a little more recently in the same arena, 2011 Champions Dallas Mavericks, yes Dirk is a beast, but do you really think that if Wade and Lebron worked as hard as Dirk did in that series they would have lost? Looking at the evidence from the following year when Miami beat another very talented team in Oklahoma City I'd say the answer is no way. Point to this guy right here.

Ok final example, one a little more close to home for me. I play for Boston Rugby as some of you may know. Last spring we had a player with the nickname of Chainsaw so we'll go with that or Saw for now. Saw sure as hell doesn't really look the part of a top flight rugger, but he played like it. In his first season he was selected to our first team squad for the Super League (don't know it? look it up), needless to say he beat out many players that have far more skills and talent than him. The reason being, and I've said this before, all Chainsaw does on the field is work work work, I swear to god he's got a 9 volt implanted up his whos-a-whats-it that just keeps him ticking. He scored so many times simply based on hustle it was ridiculous.

Finally to toot my own horn a bit, but also to prove that I know what hard work is and where it can get you. I personally have got about 1 fiber of athletic ability in my body. I'm still playing rugby while others that are probably better than me and more talented than me sit at home. I was picked and played on more select sides (aka rugby speak for all-star) in college than many players on my team and others that were more athletic and skilled than me. I worked my ass off in the weight room, on the field and in my really good years, in the kitchen (doesn't make sense to you? Give it a think). I'm proud of the work I've done and I'm not done yet. Still got good years left in my legs so I'm using them.

These are obviously not all there is, but hopefully this made you think a bit more about how wasted talent can go. That's it for today, hopefully everyone enjoyed this post and can apply it somewhere in their life. Have a good day everyone, for those that haven't yet, go out there and get it.
Posted by Unknown at 2:44 PM