Being A Pro Means Setting An Example

Happy Friday everyone, sorry for another absence from posting, fair warning my language went a little PG-13 on this one. I think the excitement from the NHL lockout finally being OVER has got me a bit distracted. I'm ready for the puck to drop on this season like you wouldn't believe. I've heard at least 2 or 3 people say that they are boycotting this season because it took so long, which is odd considering that they are also some of the same people that said, let's just get a deal done so we can play hockey, so I call BULLSHIT on you ladies and gents.

While we are on the subject of pro sports, I think it has to be said that some of our professional athletes kind of suck at setting a good example. This lockout being a good example, although the owners and players are both at fault here, and another glaring one is the NFL. Don't get me wrong I love hockey and football, played them both when I was younger, but pro football players have done a pretty poor job on setting an example on how to play the game to me. They do it at the cost of their own health, see the man below, the late a great Junior Seau, who was found to have a brain disease caused from one too many brain injuries. The players today are killing the game for the younger kids by showing you can use your head as a weapon, see this article here. Yes it is a risk you take, but there is a line I believe, and it has to be firmly drawn so we can stop kids from hurting themselves. 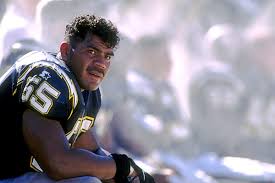 Everyone can calm themselves a bit now I'm off my soap box. This all ties to the fitness field as well. A fitness professional should be able to drink the same Kool Aid they are making, otherwise they are kidding themselves. Remember when you were a kid and you didn't like foods but never tried them, then when you were older and had the balls to actually try it and were like oh this is good? Now think how do you know the exercises work what you're targeting or if the technique is the correct technique unless you've actually done it? Sure you can read it from a book or article, but you don't actually know an exercise until you've performed it. Usually when I see a new exercise I take 5 minutes and give it a whirl in our training room here before I decide who it's right for and where I can use it.

Second part of the drinking of earlier mentioned Kool Aid, if you have a client that's looking to clean up their diet to assist with their training, why on earth are they going to listen to your advice, whether it's the best advice in the world or not, if you look like the largest bag pipe playing Scot ever? I know it's impossible to make a diet super squeakey clean and maintain your sanity for a super extended period of time so there will be days and meals you're not so well behaved, but have some self control and set a good example for your clients. I am not innocent when it comes to getting on the see-food diet every once in awhile, but I certainly don't get to the point where I'm chunk-a-saurus rex. 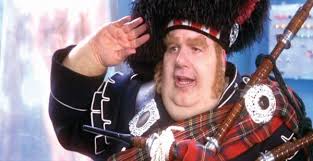 End of the day; eat decent, train your ass off, lift heavy shit and set an example for those that you influence, you may effect more people than you think. Feel free to message me directly or leave a comment. Have a good Friday everyone and get after it.