Who wants some more snow? Yeah I didn't think there would be too many hands raised for that one. Even if you are someone that enjoys the mountains and spring skiing, let's keep it in the mountains shall we? It's April so time for some warmer weather so I can stop packing gloves and a winter hat in my bag when I get on the train for work. I'm a little disappointed in Monday night's NCAA Basketball Championships results as well. Anyone that's read this blog for longer than 2 days should know I am a big Michigan fan. As big of a fan I am, my heart sank pretty deep Monday, but life goes on, and apparently so does half of Michigan's starting lineup to the NBA. The great games that were from that weekend did get marred by evidence of some pretty shit coaching at Rutgers. Those of you that have been under a rock, Rutgers basketball got waist deep in shit because of a coach that couldn't contain his tantrums or his language. All leading him to ball hurling and f-bomb dropping his way to a termination, and more dominoes fell. Sometimes coaches just try a little too hard to get through and well, it back fires clearly.

The same can happen when coaching clients and athletes with exercises. Trainers and coaches, especially relatively new ones, can care a bit too much and over coach someone on an exercise. I speak from experience because I am absolutely guilty of doing this. I've learned to just take a breath and concentrate on the main points and move from there. I can give them every little detail or focus on the big picture and get the shittner done. 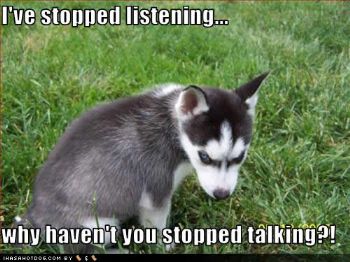 When coaching someone on one of the core exercises, ie squats, deadlifts, puhsups and so on, don't be a technique freak. People in general can only handle so much information at one time, once they hit that point they are now tuning you out. Big problem lies therein obviously once a client has tuned you out you've lost them and they will take some winning back over, whether it's in an hour or a month you're gonna have to put some work in to get them back to listening to you. Avoid sounding like Charlie Brown's teacher and focus on the main points that you need accomplished, if you still aren't feeling too good about how it's going, take a step back. I know some of you are thinking it's only for their safety, well if they switch off their listening, and they really start to mess up, they can't hear you and will hurt themselves anyway...hopefully that just made sense.

Some people are different and can inhale every bit of information like Fat Bastard inhales chicken, and not have panic attack or not get lost which is great, go nuts. I lean towards the simpler side, and if I know they can handle more then I'll give it to them. One thing I've found helpful is to have a solid base of progressions and regressions, with this tool in the kit I don't stand there and brain fart my way through the session. I said fart hehehe, OK not the point, being able to have an effective backup plan if things start to go wrong when learning new stuff can be the difference between losing a session and keeping things on track. Every so often, just STOP, inhale, relax and focus on the big picture and get to the small details later on.

That's all I got today folks, any questions, comments or suggestions let me know. Have a good weekend all, go out there and get after it!
Posted by Unknown at 11:15 AM