The Popular But Not So Popular

Welcome to Winter for those of you that have been under that famous rock. According to some crazies it can now be officially Christmas. I'm all for a white Christmas...ON Christmas, the rest of the time I will trade for something a bit warmer. Having gone to school in Orono, Maine, I'm use to the cold a bit more than the average bear, but doesn't mean I have to like it does it? OK enough of that chatter, on to today's subject. Most of you have heard of Tracy Anderson, Denise Austin, Jillian Michaels and the like. Anyone that's known me for 5 seconds knows that I can't stand any of these ladies or any of the trainers like them. No it's not a sexist thing, trust me there's some god awful male trainers out there too. 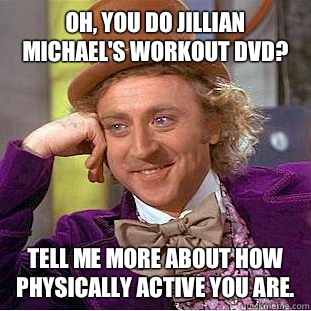 Most recently, I'm sure most of you heard this especially if you are a fan of hers, Michaels' was nailed for giving contestants on her show caffeine pills. All I can say is I knew she was a joke and now the whole world knows it, at least those with enough brain cells to not fall for her dumb excuses. This particular trainer happens to be my nemesis, for my buddy Mike it's Tracy Anderson, and for some of the older trainers and coaches out there it was probably Denise Austin.

Personally I've had it with her, yes people lose weight with her show, but forgive me for being Buzz Killington but she also leaves how many people injured on the sideline after the first week? Really effective results right there. Yeah if you survive her shit storm then you can probably handle the workouts and conquer the weight loss...IF. Now that she's shoving caffeine pills down the throats of her clients, who are most likely already a walking Mohave inside their bodies', we can really see how quick the weight drops.

For those that don't know of Tracy Anderson's accolades, quick summary, recently she was Gwyneth Paltrow's trainer, whom helped her get fit for some of her recent movies...problem is Paltrow now has Osteopenia, the precursor to Osteoporosis. WAY TO GO! No major weight bearing exercises will do that sometimes. I'm sure Paltrow is really happy with that result. Busting her ass for an hour plus 6 days a week and now she has a major health condition.

To put it in pretty plain english on how your bone density builds and to fight this shit off. When your bones are loaded axially (weight on your back, chest, in your hands near your center line), they have to fight back. Your body sends a signal to your bones to reinforce itself. When you don't over load your skeletal system (there is a limit you can load it yes) then your bone density slowly declines and voila Osteopenia develops. As I said there is a happy medium and a constant over load of your skeletal system, usually caused by obesity, won't do yourself any favors either.

Now I'm not bagging on any of these ladies for some of the results they've produced, including their own, because clearly they have gotten them somehow. What I'm getting at is it's sad because they probably do some of the same shit coaches like myself and similar to me do in their own training and at one point they did it with their clients. The problem is they know they could make more money pumping up shit that people believed was always the answer and used the hot button words like "targeting" "burning" and "toning". I'd take their success and money, but not at the expense of selling my soul to the mass media. I'm sure if you search them for their educational backgrounds you'll see that theirs is not dissimilar from a bunch of strength coaches and trainers that are very good.

They knew there would be a huge market for people that don't actually want to get off their ass, get to the gym, be sore and put some work into it, so they went the rout they did. I honestly have no evidence that their methods don't actually work if you stick to the plan, and I'm sure there is some that support their shit. I'm positive there's shit-tons of evidence to support the methods of those like Eric Cressey, Bret Contreras, Mike Reinold and even Mike Boyle, though many in the industry think Boyle is a bit off the handle these days. Problem any of the above is most people don't do it either way because they find excuses to not do it and their results go down the pipe. The whole no progression and same shit different day routines that these celeb trainer videos produce is just more likely to get people bored and they stop.

As I've said before something is always better than nothing and if it's not for you then it's not for you. As I've also said before, if you are going to burn the time, why not do something useful. Ladies if you would like to see why things like what I do for my workouts can do for you check out sites like Girls Gone Strong and Spot Me Girl. I know some of you are going to think, "I don't want to get big and bulky", trust me it's hard enough for me, that's not going to happen. On the other hand if what you are worried about is how defined they are, that's a matter of your body fat percentage. 17-20% body fat for a woman is pretty good so don't have a fit if that's the case ladies.

That's all for today, good to be back and happy holidays in the likely hood I don't write before next Wednesday. Go out there and get after it.
Posted by Unknown at 9:24 AM